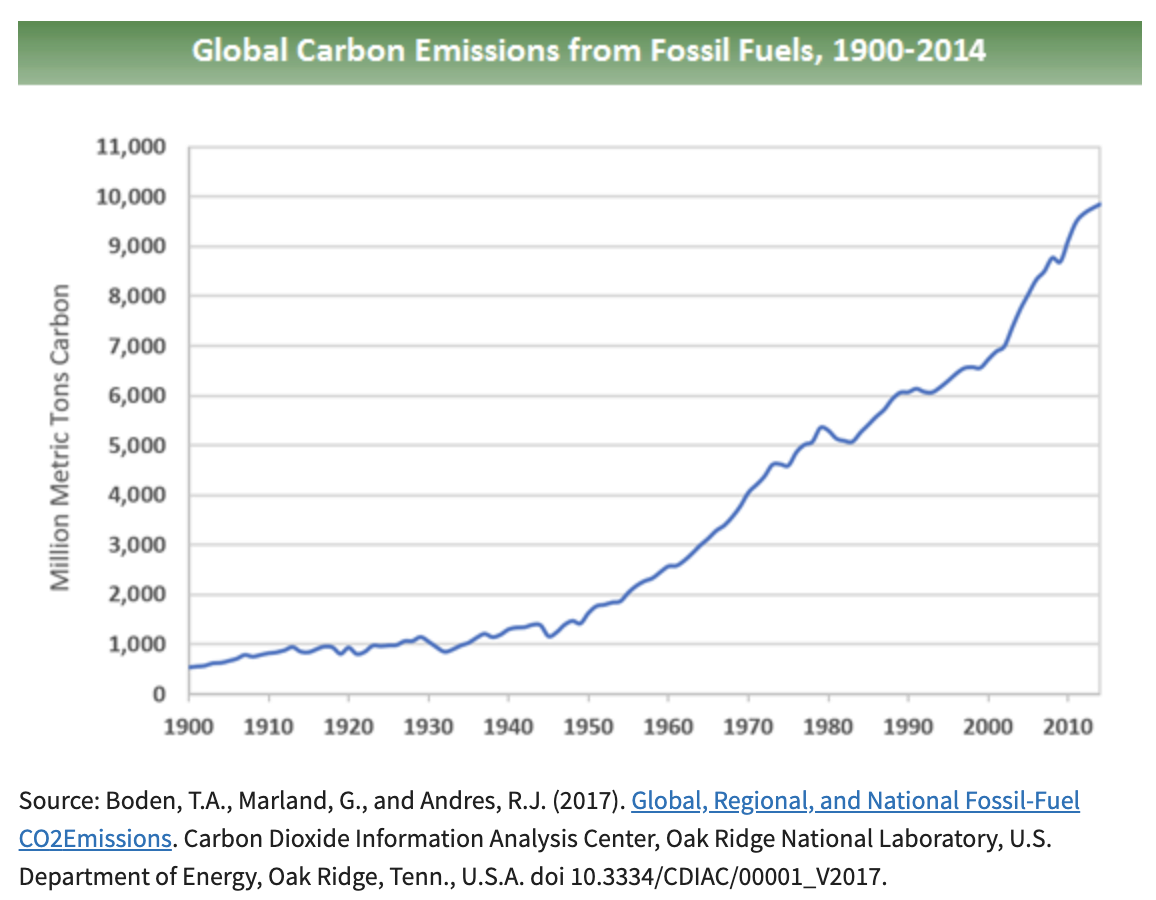 Figure 1: From US EPA

These facts are well established and well known. The problem is what to do about them. That problem is complicated by the fact that action on climate change is often presented—accurately—as costly and difficult, but necessary. The following passage is typical:

This “tough decisions” message, truthful as it is, is in fact a message that many people will not be receptive to, simply because it is tough. Lamentable as this may be, the brute fact is that change will happen faster the more people there are who see an immediate and direct benefit to themselves.

There are things that can be done, including behavioral interventions that circumvent biases and irrationality, effective framing, and research aimed at understanding human decision making. All of this is well and good, and should be vigorously pursued. My purpose here is to draw attention to different approach, one that is entirely complementary.

Consider the following passage appearing in a recent op-ed piece in the Philadelphia Inquirer. The author is discussing a proposal for handling storm water, which proposal she claims:

…creates community green space, revitalizes vacant lots, enhances recreational use, and even reduces illegal drug use in public spaces. It can reduce heat stress and energy use while improving air quality and contributing to climate change resiliency. And …can stabilize property values and reduce poverty through job creation.

In all, as we can see, she recruits ten values (create community green space; …; reduce poverty through job creation) that she adduces in favor of her proposed policy.

The proposal advocated by Jacquelyn Bonomo in the Inquirer piece is presumably not the cheapest—not the best on direct, immediate costs—of the proposals under consideration. Were it otherwise, she would have argued directly for it on the basis of cost. Instead, she appeals to other values to compensate for comparative weakness on the cost value.

Bonomo’s strategy is entirely legitimate, and in fact is routinely and widely used. We may describe it as recruiting values beyond the narrowly economic to support a policy position. Much of what makes complex problems complex is that multiple values are in play. Climate change is a case in point. Here and in general, normatively proper decision making requires that all pertinent values associated with a decision be identified and considered in the deliberation for decision making.

The observation I would to make, the impetus for this blog post, is that recruitment of values beyond the narrowly economic has not been done thoroughly and systematically enough on matters pertaining to the necessary transitions mandated by climate change. There is opportunity for the climate change community to do better. Proposers (Bonomo is an apt example) today must, on a case by case basis, identify and assess the wide range of values associated with policy initiatives.

Imagine instead that an organized, curated, maintained, and accessible body of information on recruitable values were available to help every Jacquelyn Bonomo making a policy proposal for climate change transitions. We might call this tool a climate change values repository.

Note that many, perhaps all, of the ten values Bonomo cites as favoring her proposal (above) are relevant to other transition issues. Knowledge assembled about one value—its benefits, its costs, its main characteristics—can be leveraged in multiple ways and on multiple issues.

Such a tool would bid fair to speed the development of transition policy proposals, and strengthen them in the process. It would also speed the identification of weaker ideas, serving to focus attention on more promising ideas. It could help to assemble policy bundles that would be broadly attractive. Log rolling is an essential, legitimate feature of compromise and accommodation of diverse interests. Also, because the values in play for climate change are wide-ranging, assembling a climate change values repository will serve to draw in and involve a correspondingly wide-ranging collection of people, skills, and interests.

Most important of all, the values recruitment approach, and any tool to support it, would afford ways of reaching people for whom the tough decisions messaging fails to convince. By systematically and thoroughly recruiting values beyond the narrowly economic and beyond a narrow focus on the primary targets of climate change transitions (for example, reducing GHG emissions), we can hope to find values and benefits that make tough decisions easier and even attractive for a wider circle of people.

Steven O. Kimbrough is Professor of Operations, Information and Decisions at the Wharton School.